Down the rabbit Hohner

Down the rabbit Hohner

Recently I've moved to a house which has a relatively old electronic organ. The organ is a Hohner Symphonie D92. I believe it was manufactured in the early eighties. 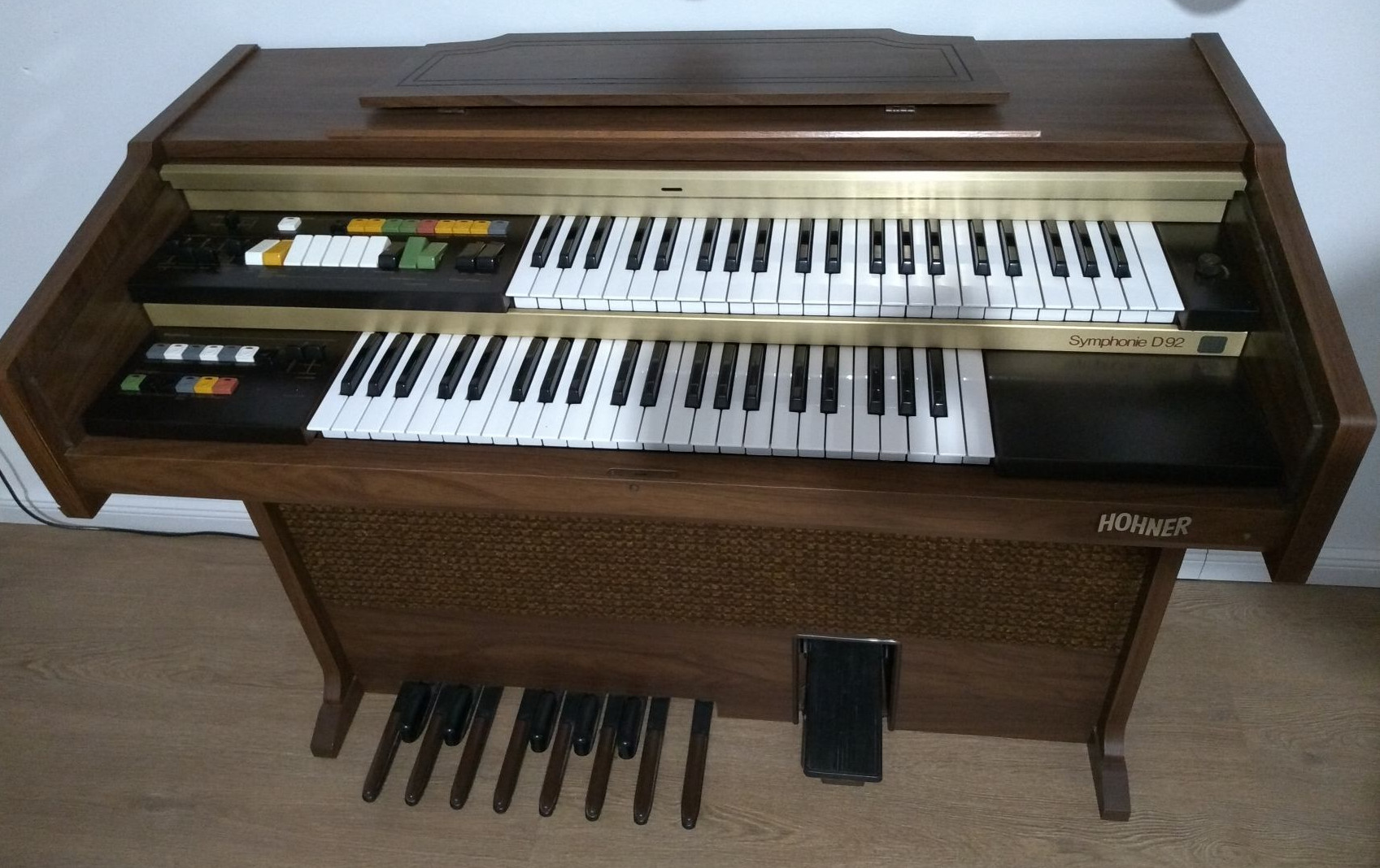 I'm totally clueless at organs. The Hohner looked pretty cool, but I had no idea how it worked. My first instinct was to plug it to the mains and see what would happen (always hoping that I would not simply explode). After turning it on for the first time, nothing spectacular happened. A led turned on and that was it. No sound at all, but luckily no smoke either. Being clueless, I didn't really know what to expect. I looked under the keyboard and saw a little box with some outputs (external amplifier and headphones). Then I thought, "well, if it has an external amplifier output, I probably need an external amplifier". I tried to plug the external amplifier output into my bass amp, but still no sound. Then I plugged the headphone output into the bass amp and could hear a very low sound. Pretty disappointing. That was right after I had moved to the house. Not really amused by the performance of the organ, I left it alone as decoration for a while.

Some months later I decided to take another stab at it. Even though my previous attempt to use the external amplifier output was not successful, I decided to make a full round of tests again. I didn't have my bass amp at home this time, so I used a small Marshall Kilburn amp that I use to listen to music. To my surprise, it worked. That was exciting. A few days earlier I had seen a small practice Hartke bass combo on Ebay Kleinanzeigen, so I thought I could buy it and use it for the organ. The bass combo was very inexpensive and available a few kilometers from where I live. So I just went there and picked it up. At home with the combo, I first gave it a try with a bass and it sounded ok. Then I plugged the organ into it and, voila -- no sound. What the hell! The bass amp was good and the organ had worked when plugged to the Marshall amp.

Intrigued by the mono/stereo issue, I decided to take a look at the manual. Of course, I could have done that before even have plugged the organ to the mains when I first saw it, but why spend ten minutes reading the manual when you can spend hours randomly fumbling with things until they do something you don't understand and then you resort to reading the manual?

While reading the manual, I noticed that there were no evident instructions on how to plug the organ into anything. There was, though, a very small note on the external outputs, but it looked like they were completely optional. So I thought maybe the organ has an internal amp and a speaker. I started tapping around the front of the organ and, bingo -- there was something that looked like a speaker. That was it. Now, that was only a couple of hours after I had bought the external amp just to connect to the organ. Anyway, the tour through the rabbit hole was about to begin.

I decided to take a look at the inside of the organ to see what was there, and hoping that the problem was just some loose wire somewhere. I opened it from the back side, then I could see the 12'' speaker and a tweeter. After more or less 40 years, it had accumulated some dust, but that was fixable. Now that I knew that the organ had an internal amp, I wanted to make it work. 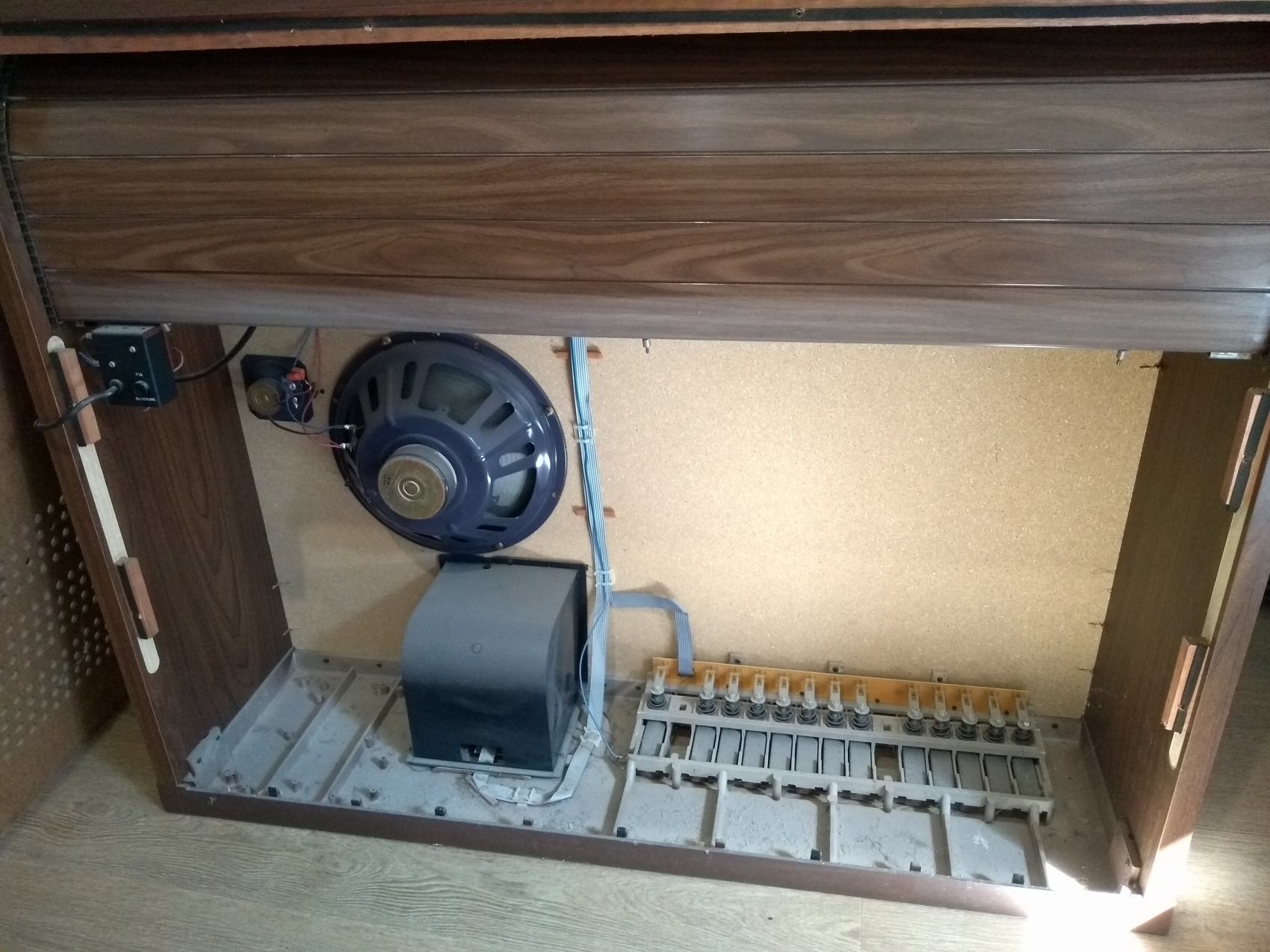 The amp was completely dead. No sound whatsoever. After the back of the organ was open, I could see some of its circuits. Unfortunately, I could not find any evident problem by just looking at what was there. I didn't want to make a similar mistake I made with the manual so I quickly checked the intertubes to see if there was some sort of schematics of the circuitry. The chances were very slim, but luck was on my side this time. I could find the schematics of the complete set of circuits of the organ. 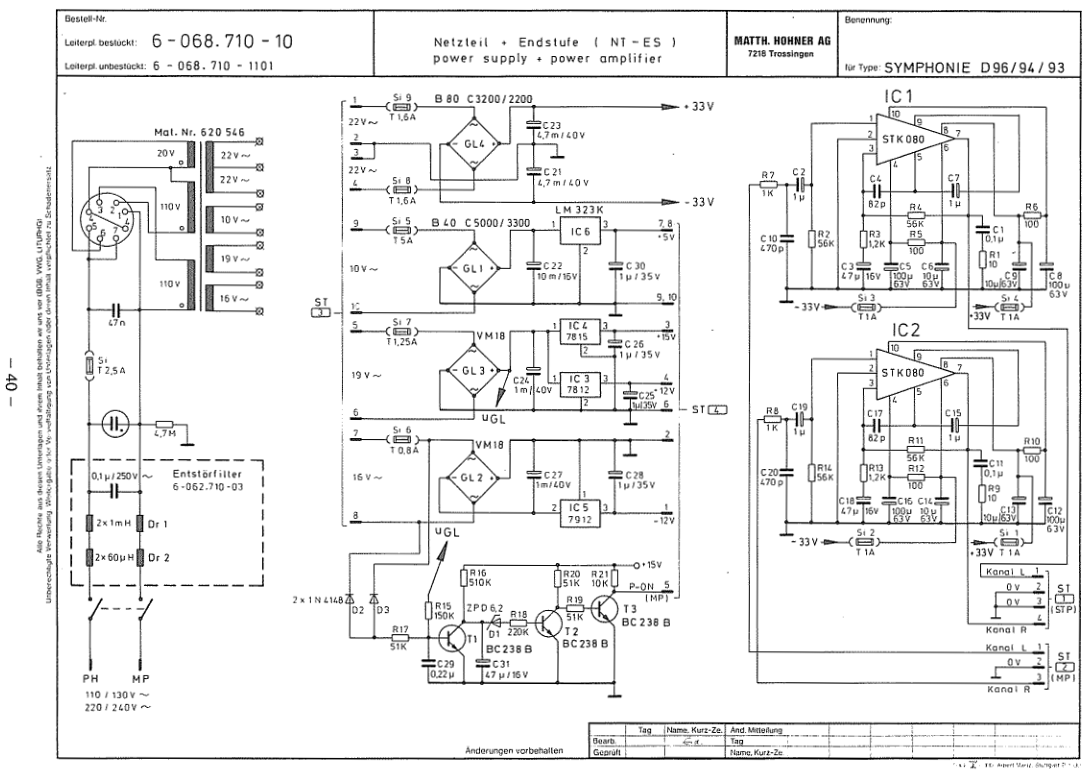 I found some fuses on the board that, judging by the size of the capacitors and the proximity to the power transformer, seemed to be the power supply ones. I double-checked the schematics and indeed they were. I tested the fuses and confirmed that two of them were open. Now that could be either good or bad news. In the good case, the fuses blew due to some unfortunate glitch. In the bad case, something was off and causing them to consistently blow. I took the lazy path of just replacing the fuses. Sure enough, they blew again. 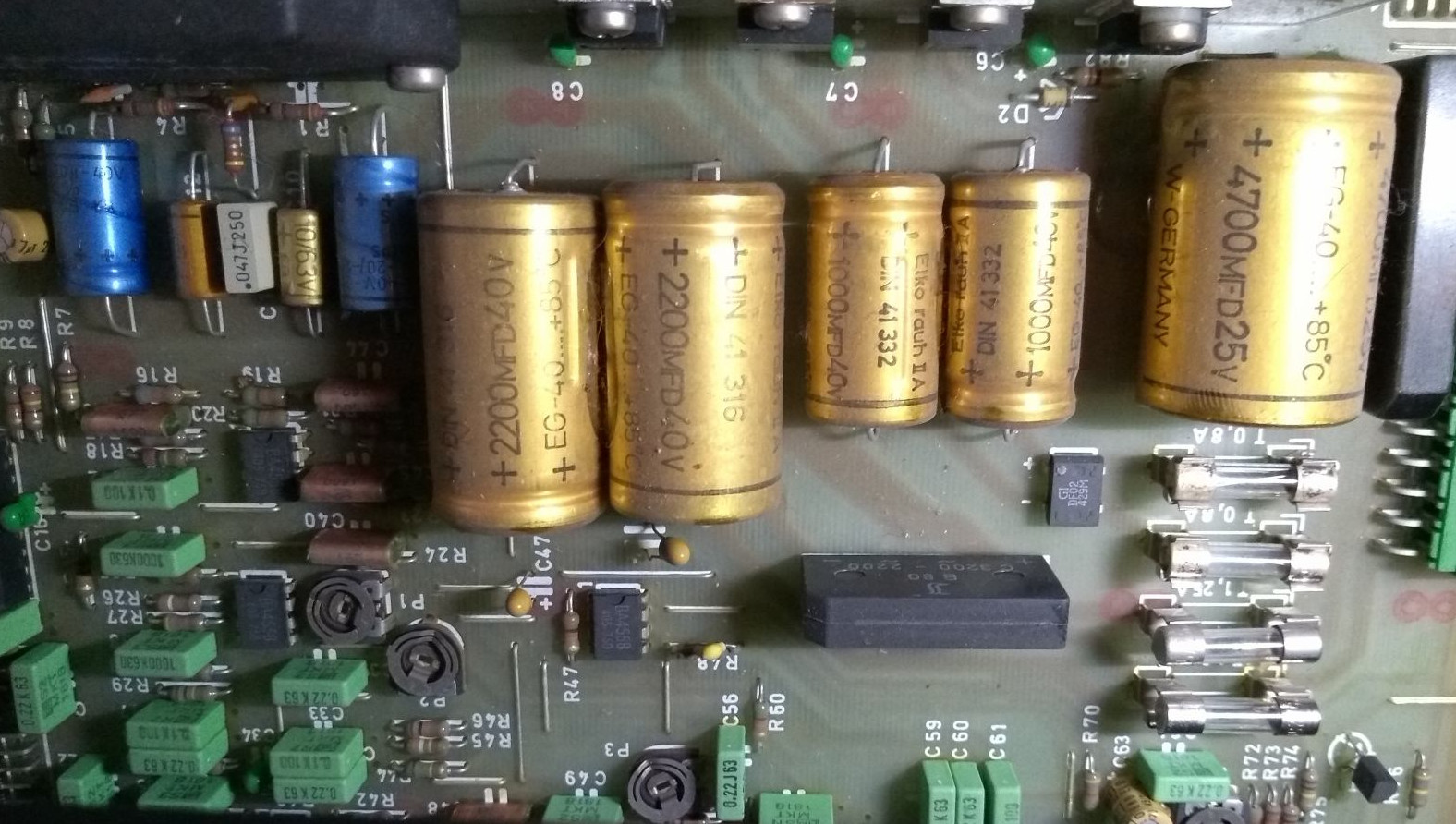 Following the lines in the circuit board I tried to look for the potential suspects. Those would be the electrolytic capacitors, which normally have a limited and relatively short lifespan. Of course, it could have been any other component (e.g., the rectifier bridge), but the main suspects are always those electrolytic capacitors, specially if they are old. I removed the ones which were connected to the blown fuses to test them and they were indeed short-circuited, which caused the fuses to blow. 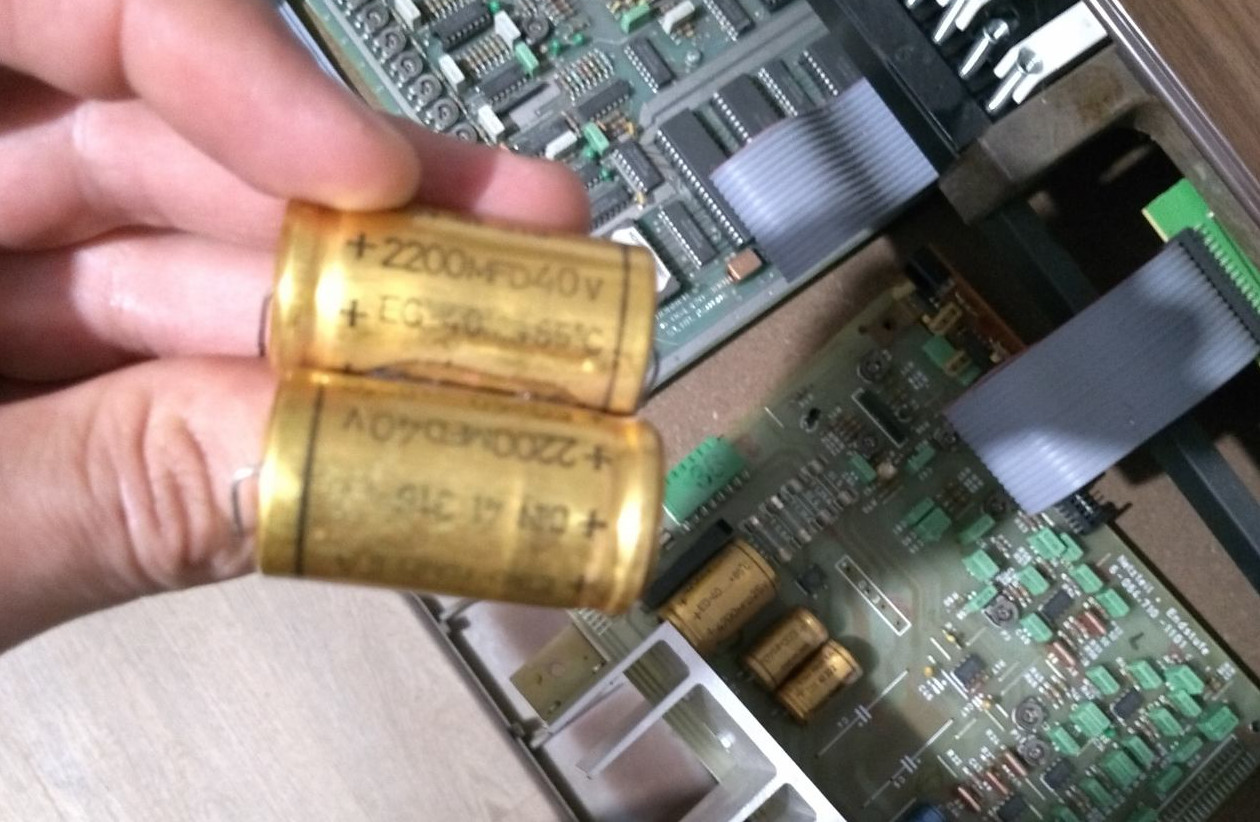 Just in case, I went ahead and also checked the rectifier bridge, which turned out to be ok. 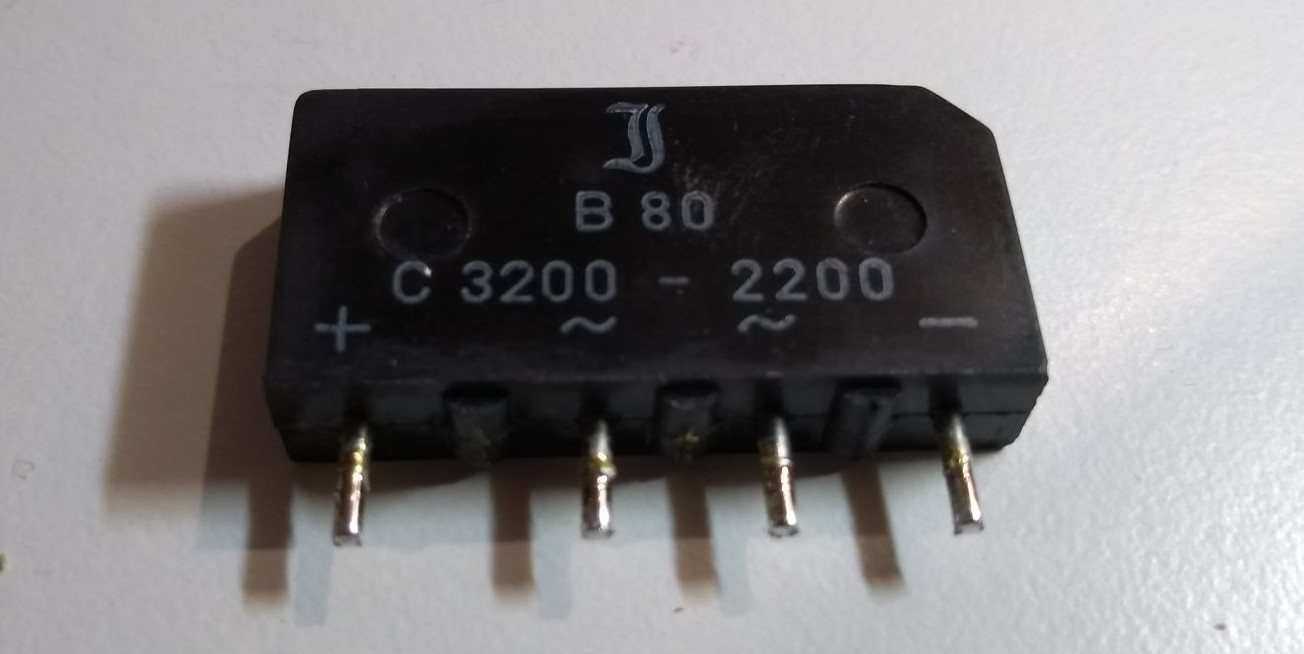 Knowing what some of the problems were, I went ahead and ordered the capacitors from an online store. Disappointingly enough, that's what I received: 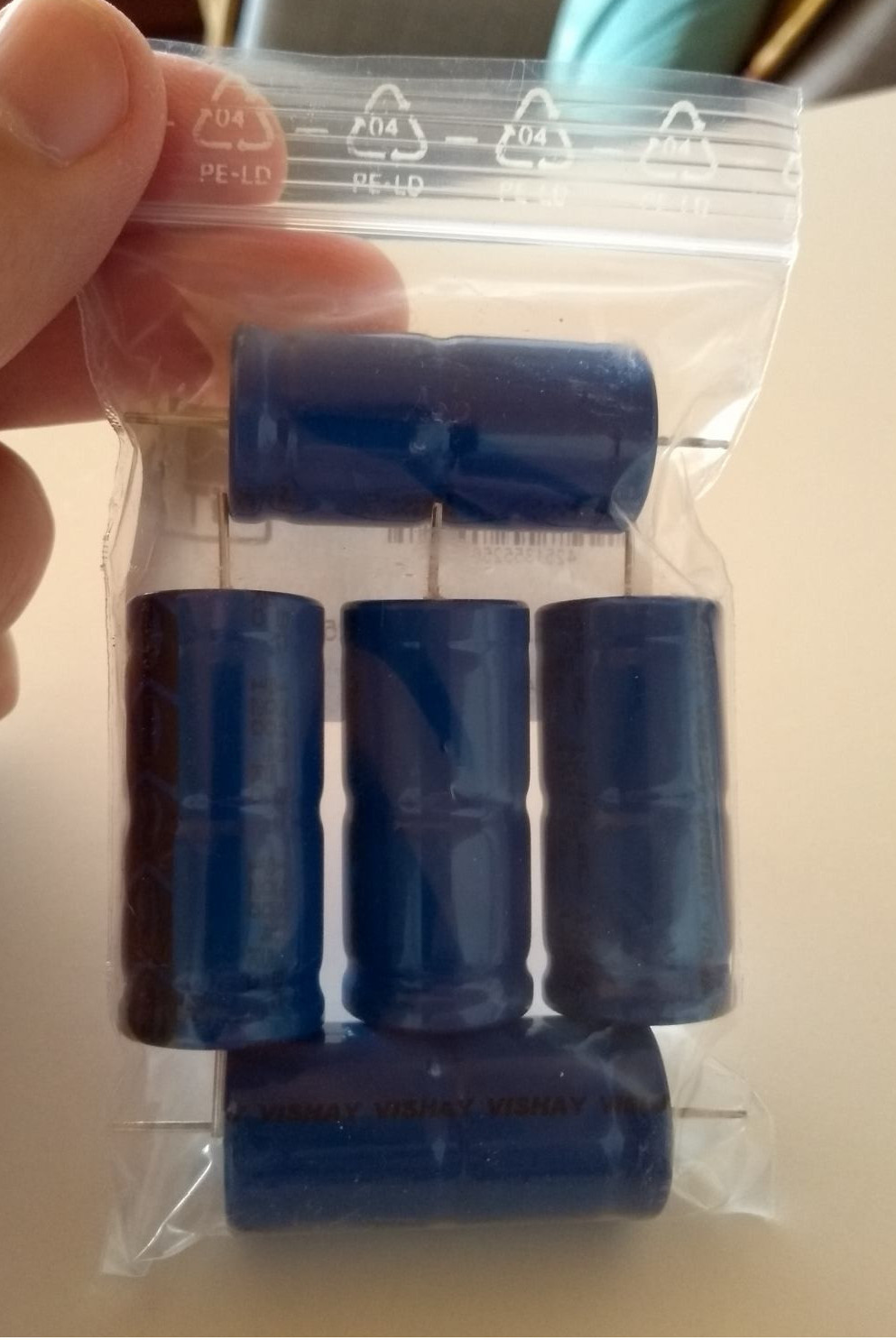 What kind of prankster cuts the legs that short!? That's a whole new level of cutting costs down.

Anyway, since I was already there, I went ahead and changed another electrolytic capacitor of the power supply (that was actually still working, but just in case). My plan was to change all of them, but the physical size of some of the new ones I received didn't fit the space available in the board (I couldn't find ones with the exact voltage specs as the old ones, so I went for higher voltage, which are bigger), so for the time being I left them alone, as they are still working. 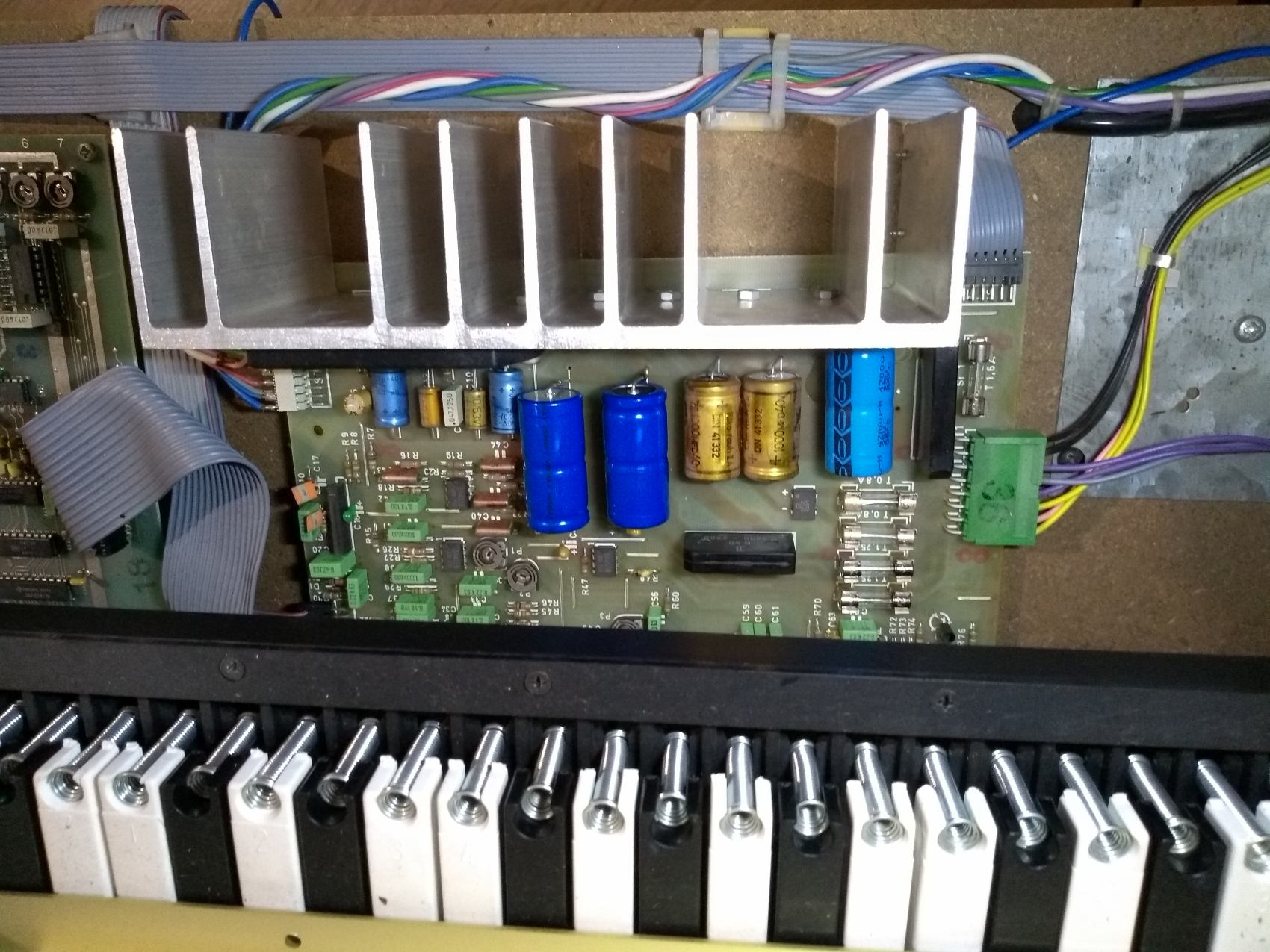 After installing the new capacitors and changing the fuses again, I turned on the organ and it was finally producing sound.

Back when I plugged the Marshall amp to the external amp output, I noticed that some keys were not responding well to the touch. It felt like a contact problem. Since I already had the organ open, I decided to check if that could be fixed. 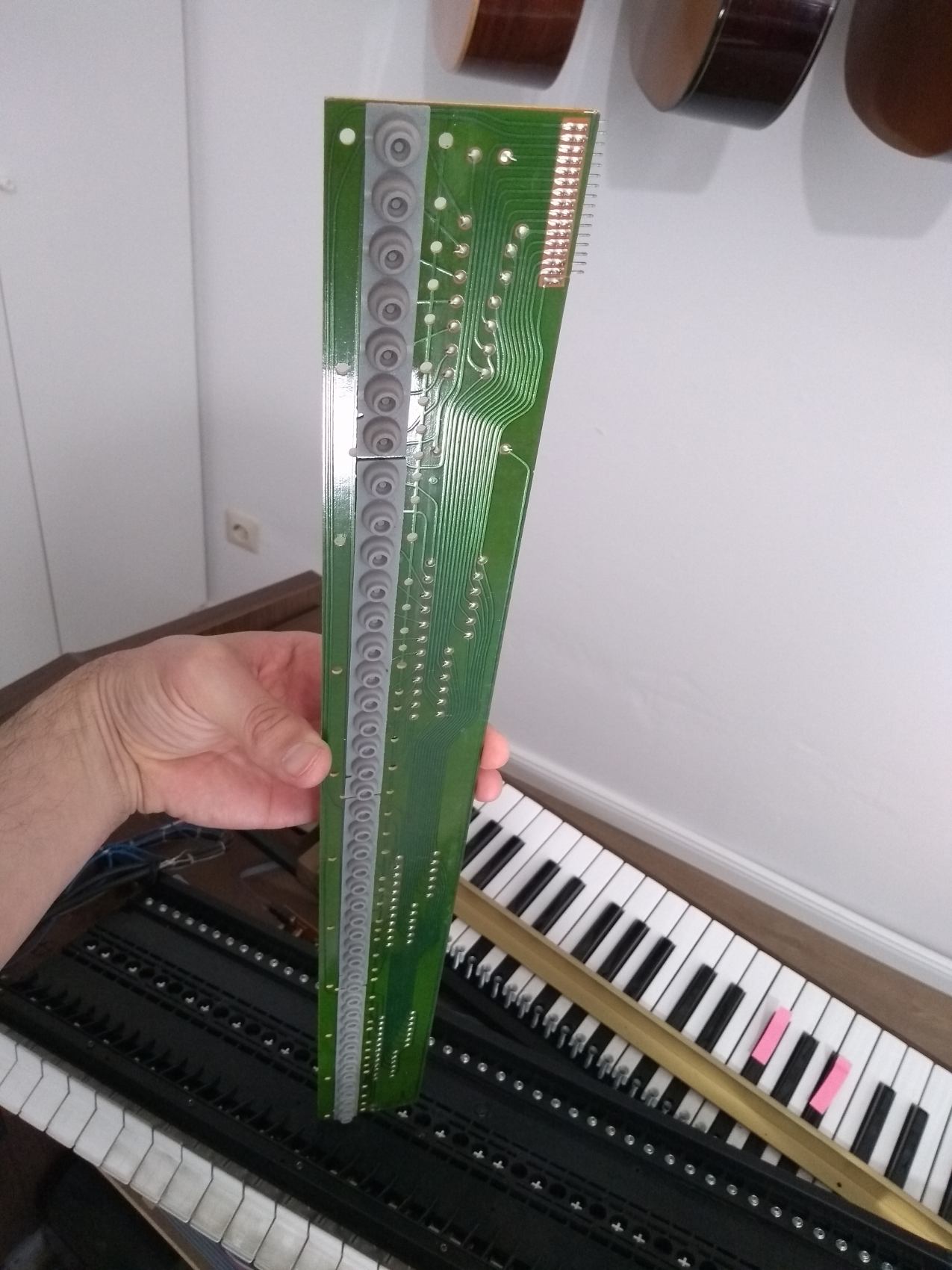 All it took was a bit of isopropyl alcohol to clean them up and they were working like new again. 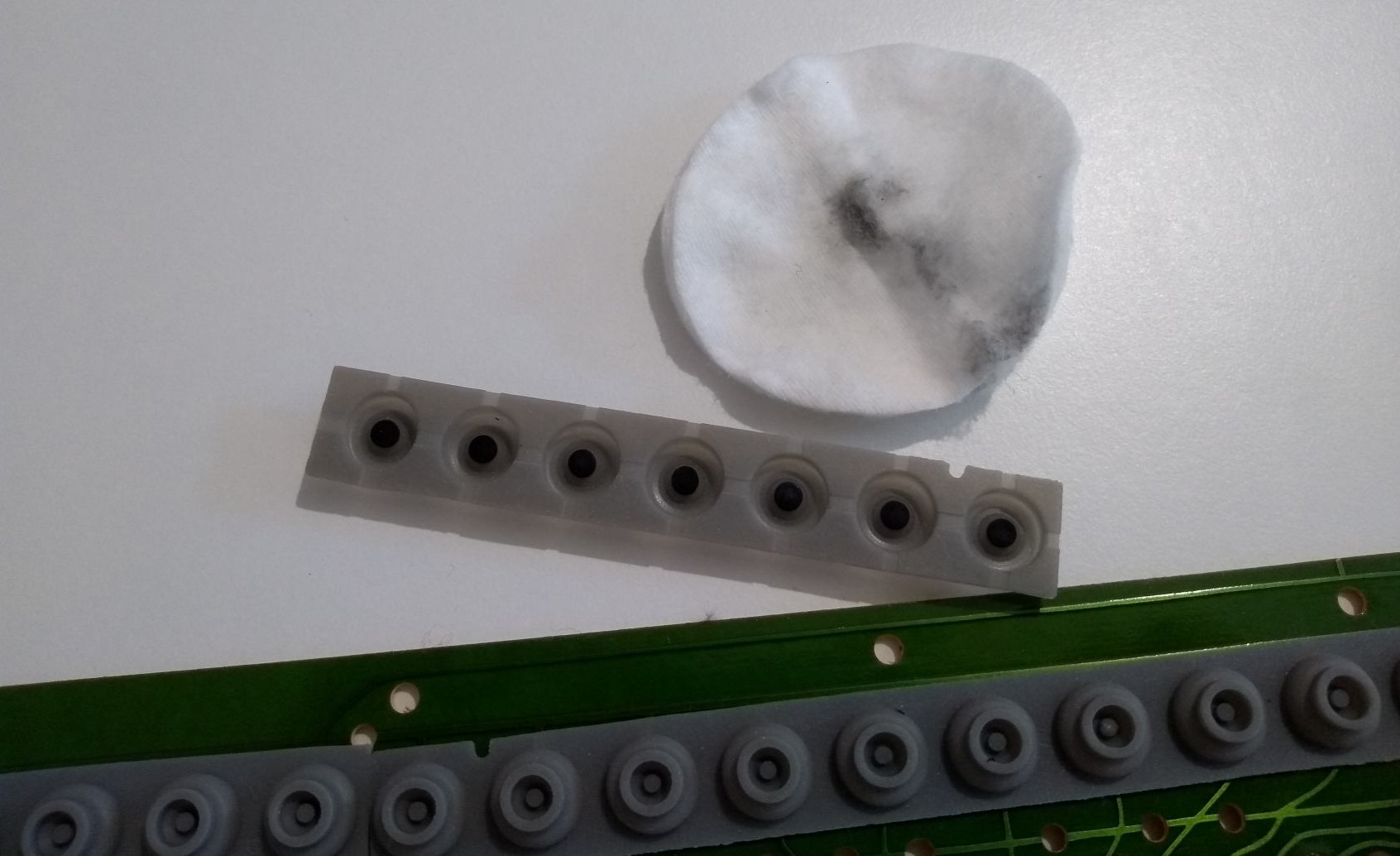 After those maintenance procedures the organ seems to be working perfectly. Now I just have to learn to play it...